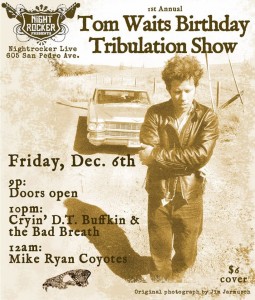 Mike Ryan Coyotes and Cryin’ D.T. Buffkin & the Bad Breath will be performing a night of Tom Waits’ Songs in honor of Tom Waits’ birthday. Join us in celebrating the unique talents of Tom Waits Friday, December 6th which will also mark the NIGHTROCKER LIVE Music Venue four year anniversary.

This will be a huge undertaking for both bands, as they challenge their musical boundaries, push their …limitations, and debut objects rarely seen on a musical stage to recreate some of Tom Waits’ greatest hits. Song selections will span all 40 years of Tom Waits eclectic musical stylings including both his earlier more jazzy piano based songs and his later more avant-garde works.

“I don’t like the stigma that comes with being called a poet– so I call what I’m doing an improvisational adventure or an inebriational travelogue, and all of a sudden it takes on a whole new form and meaning. If I’m tied down and have to call myself something, I prefer ‘storyteller’.” –Tom Waits